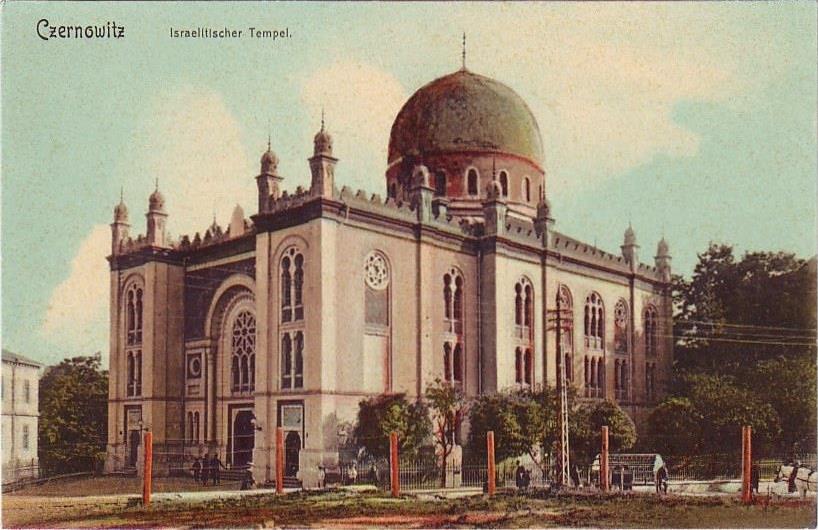 The History of the Jewish community of Chernivtsi

Chernivtsi is a city in Bukowina, situated in the southwestern region of Ukraine, where the existence of a Jewish community was first documented in 1408. Chernivtsi was a border city and part of the Principality of Moldova from 1359 until 1775. The city became a part of the Austrian Bukowina around the end of the 18th century. The Jewish community employed the Yiddish language, was engaged mostly in commerce, and continued to expand despite the limitations imposed on Jewish people in the Austrian Empire. Thus, in 1880 in Chernivtsi there were 14.449 Jews, representing 31,7% of the city’s population.

Since the 19th century, some Jewish people have opted to speak in German, instead of Hebrew or Yiddish. The Jewish communities’ rights were limited in that period as well. They were only allowed to work as craftsmen, merchants, moneylenders, builders or real estate owners. Since German was the official language of the Austrian Empire, and Jews desired to be accepted and integrated in the society, they preferred to use German. As a result, the Jewish community in Chernivtsi split into two different directions. One of them was represented by the Jewish bourgeoisie, who promoted liberalism and wanted to adopt the German language, while the other one was represented by ultra-orthodox Jews, who desired to use Yiddish and Hebrew and to live a traditional Jewish life. Starting from the middle of the 19th century, the Jewish bourgeoisie embraced modernization, meaning it was willing to give up the conservative lifestyle and to educate their children in German. Religiously, this divide manifested itself through the election of a rabbi who preached in German, by the liberal group, while the ultra-orthodox Jews chose their own rabbi who adhered to the religious traditions. Eventually, the local authorities put an end to this conflict by establishing a network of institutions, such as prayer houses, synagogues, asylums, orphanages, fundations, and a school in both Hebrew and German. In 1867, the Jewish people in the newly formed Austro-Hungarian Empire were granted equal rights with the rest of the population, as well as the freedom to practise any occupation. 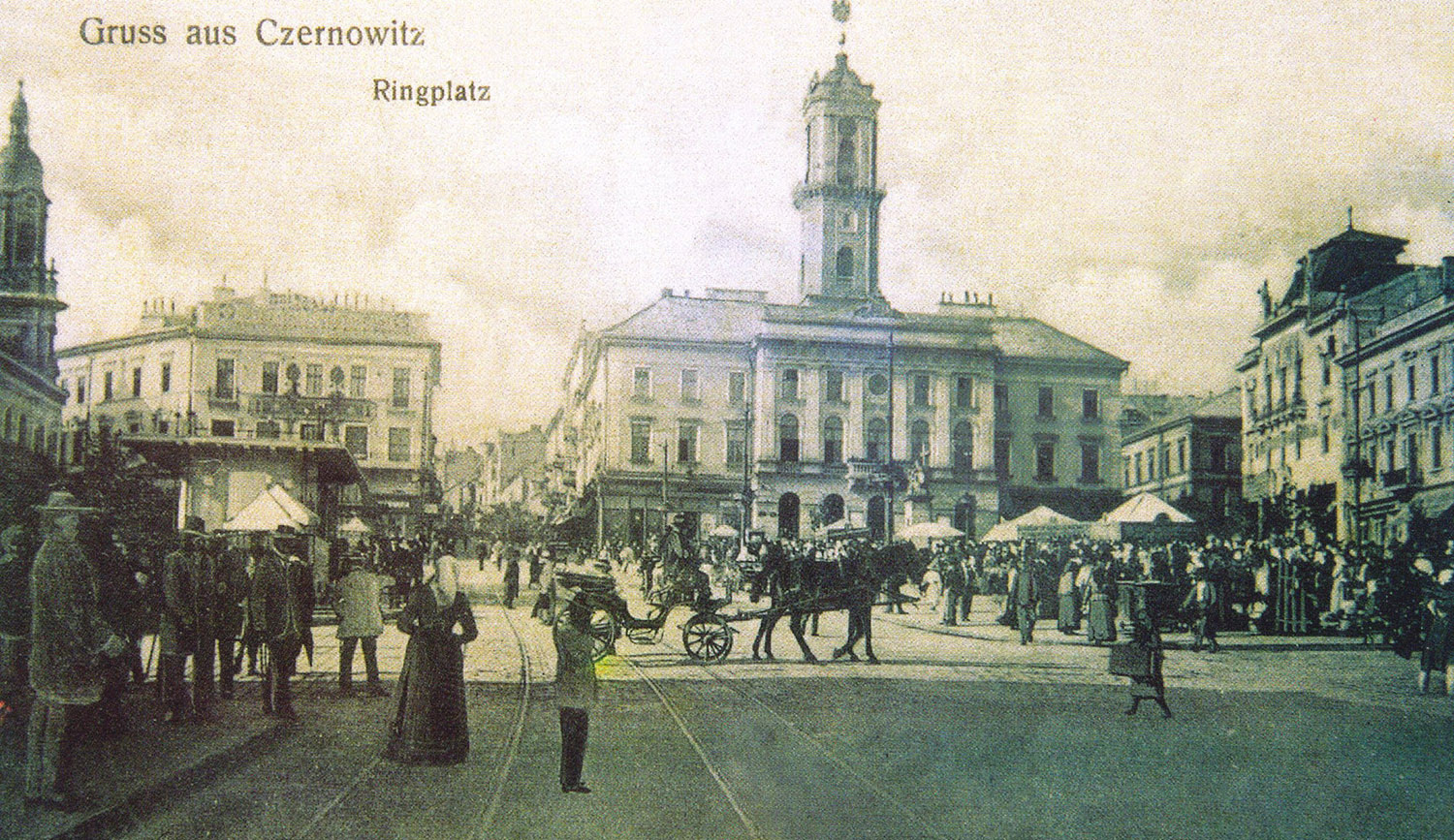 The city hall of Chernivtsi in the 19th century.

In the beginning of the 20th century, during WWI, Chernivtsi was constantly occupied by Russian, Ukrainian, and Romanian armed troops, which caused many Jews to leave the city. Despite this, in 1930 there were 42.592 Jewish people living in the city, representing 37% of the population of Chernivtsi. After WWI, with the fall of the Austro-Hungarian Empire, Chernivtsi became a part of Great Romania. The incorporation of new provinces in Romania required their romanisation, and therefore several romanisation procedures were started in Chernivtsi as well. The population of Bukowina was forced to adopt the Romanian language, instead of German, streets were renamed, and school lessons were held in Romanian. In response to this pressure, the Jewish community continued to use German and gradually began to appreciate Yiddish as well. Between 1919 and 1933, the Jewish people who had remained in the city and held important positions prior to the war were allowed to continue working on the local council, as deputy mayors, or on associations of independent professionals, in the Chamber of Industry and Commerce, or even in the Romanian parliament. 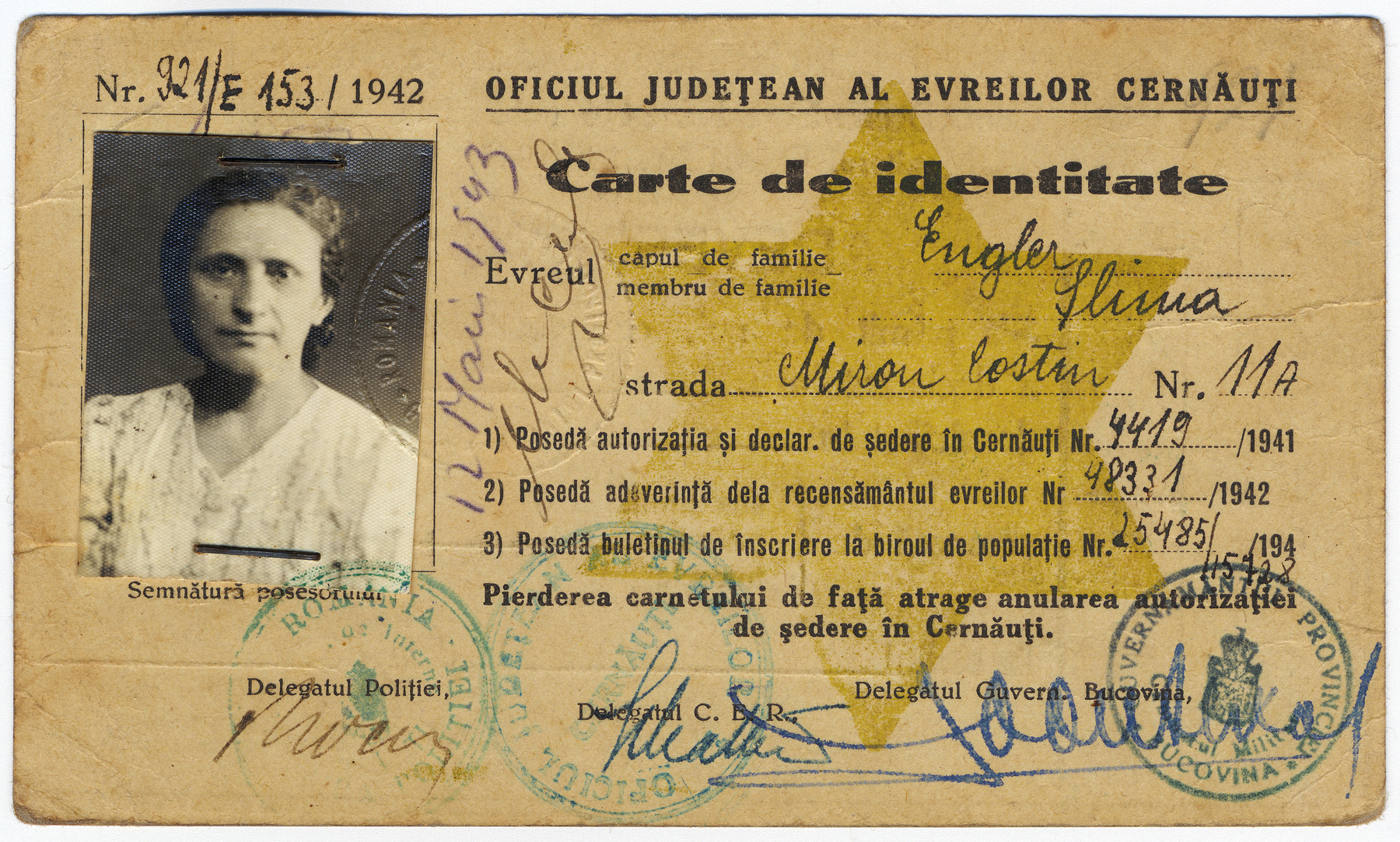 In 1940, during WWII, the Red Army conquered the Chernivtsi region, which became part of the USSR. Later, around 3.000 liberal bourgeois were deported to Siberia. People who were considered anti-Soviet, or enemies of the state, were deported to labour camps or to regions that needed to be repopulated. In 1941, German and Romanian forces occupied the city. Ion Antonescu, the leader of the Romanian state at that time, introduced anti-Semitic policies that resulted in the suspension of Jewish daily newspapers and the arrest and condemnation of rabbis and Jewish leaders. In Chernivtsi, he took the civil and economic rights of Jewish people, he ordered the execution of the chief rabbi and the arson of the temple. In 1941, the Romanian administration created a ghetto in Chernivtsi, where 32.000 Jewish people were imprisoned and eventually deported to the labour camps of Transnistria. 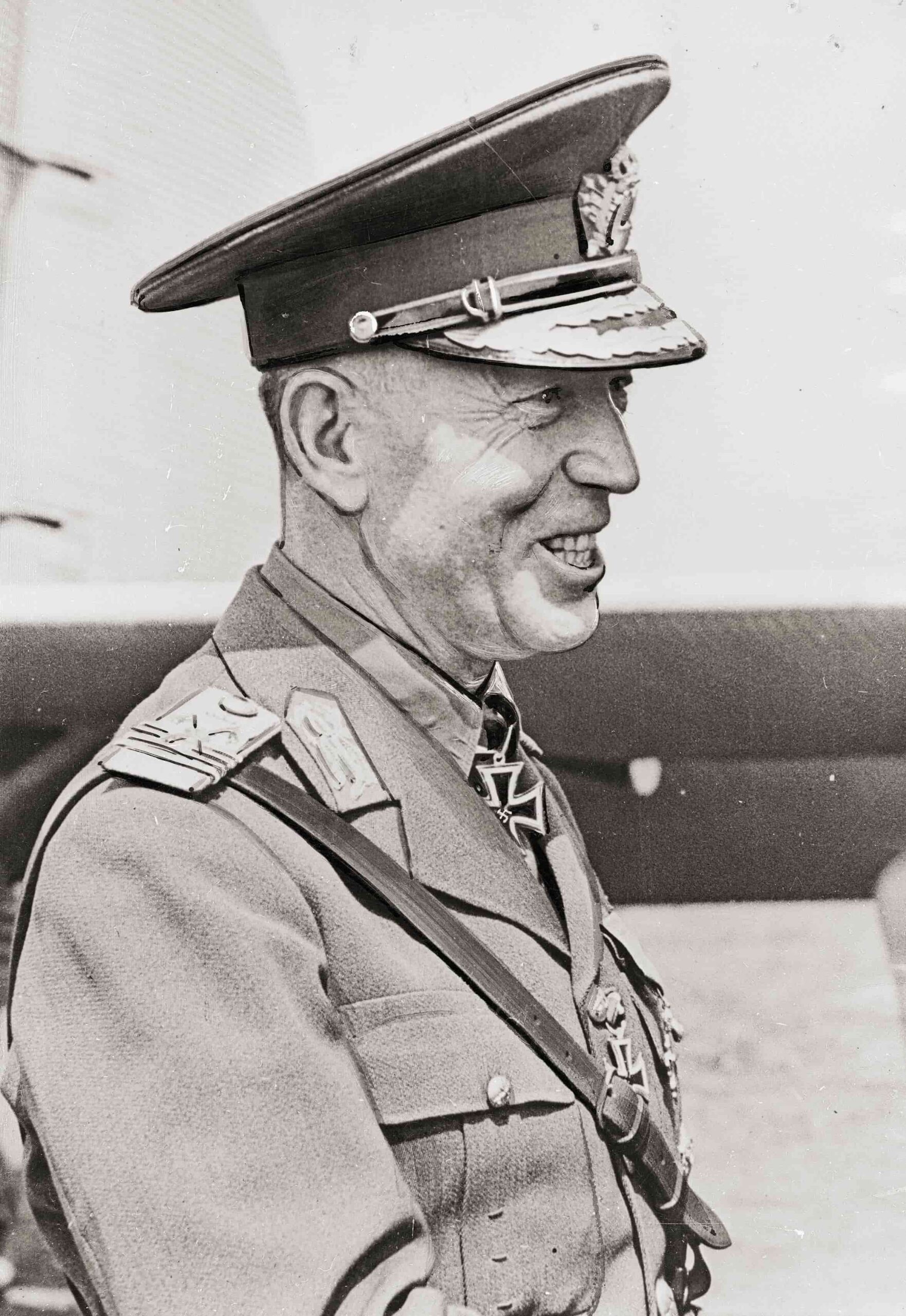 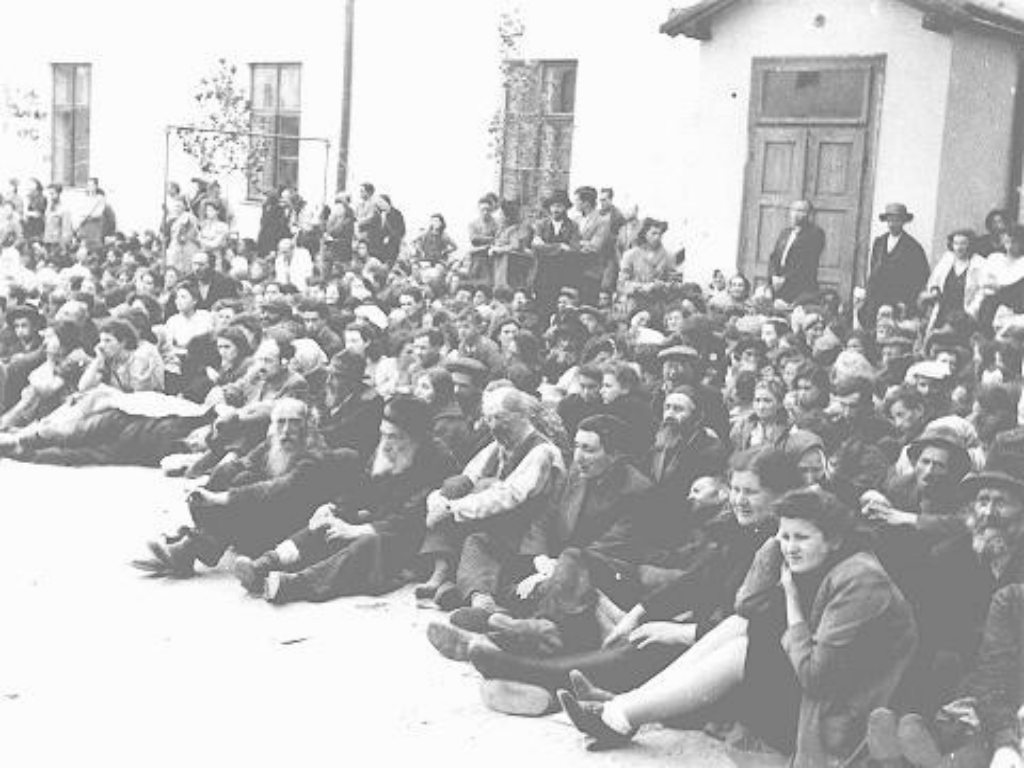 The city’s mayor, Traian Popovici was able to get permission for 17.000 Jewish people to remain in Chernivtsi to do forced labour and thus avoid deportation. He demanded that Jewish people converted to Christianity, intellectuals, artists, those who served the Romanian state, pensioners, army officers, the disabled, industrial workers, doctors, engineers, architects and those in the judicial system to stay in the city, so that the city’s production for the war would not be severely affected. Almost 30% of Chernivtsi’s Jewish community had survived this way. 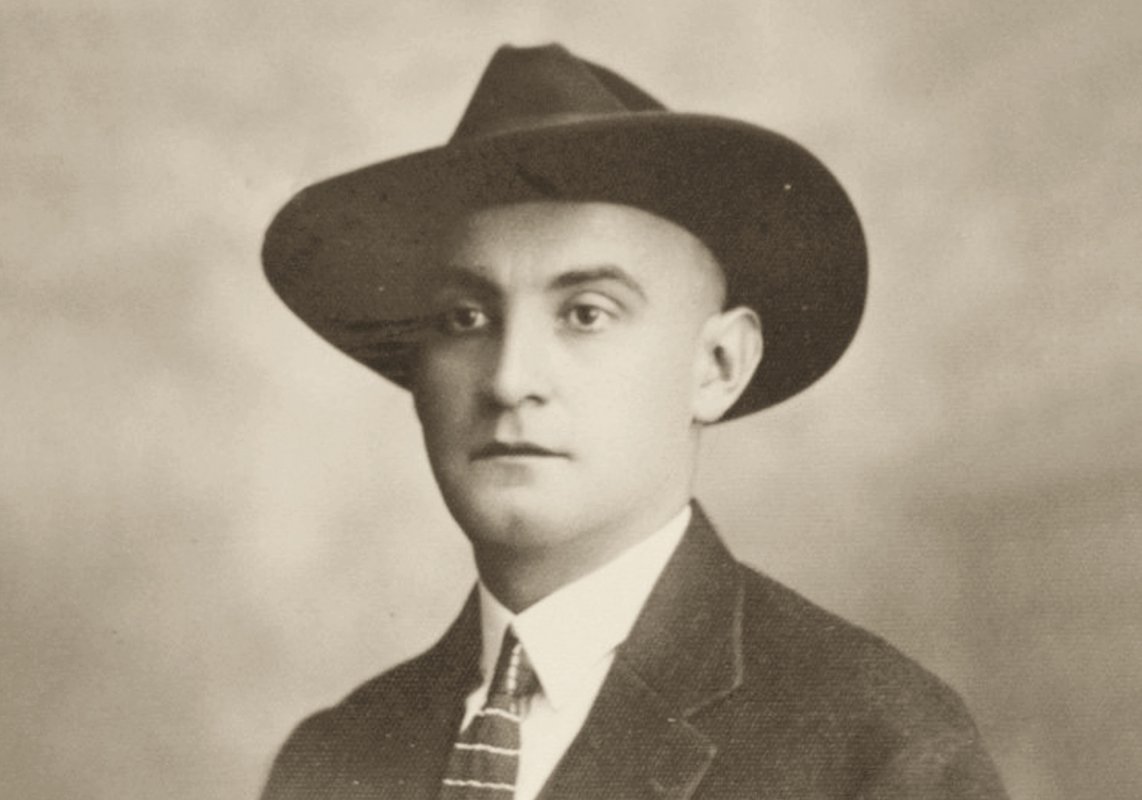 After the war ended, between 1945 and 1946, the Jewish survivors of Chernivtsi deported to Transnistria received a visa that allowed them to emigrate to Poland and Romania, and then to Palestine. Chernivtsi was an important node in the Zionist network known as Bricha, which helped Holocaust survivors to emigrate to Palestine. In the following decades, many of the Jewish people who stayed in Chernivtsi, or in Ukraine in general, forced to live under the communist regime, decided to emigrate to Israel. In the early 90s, the Jewish people who remained in the country hoped for some relief after the fall of communism. Unfortunately, even after Ukraine gained its independence in 1991, anti-Semitic policies continued to be introduced. Ukraine was intending to rebuild its national identity after communism, and that affected minority ethnic groups. Today, there is only one functioning synagogue in Chernivtsi, and the city’s Jewish population is estimated to be approximately 1.300. 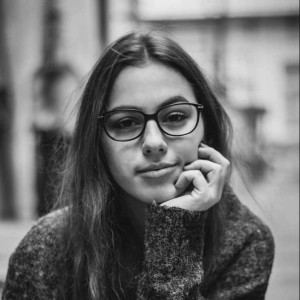